Propaganda must be total. – Jacques Ellul

Propaganda does not aim to elevate man, but to make him serve.

And so after throwing the word propaganda out there we still need a some way of defining it so that the word doesn’t descend into the cruder sense of ‘their lies, our truths’.

As I mentioned earlier I have based much of my thinking on French sociologist Jacques Ellul and particularly his 1961 book Propaganda: The Formation of Men’s Attitudes. 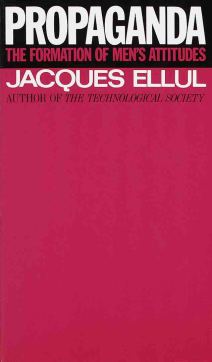 Let’s pull out a few quotes to give you a taste of his thinking here.

Propaganda tries to surround man by all possible routes in the realm of feelings as well as ideas, by playing on his will or on his needs, through his conscious and his unconscious, assailing him in both his private and his public life. It furnishes him with a complete system for explaining the world, and provides immediate incentives to action. We are here in the presence of an organized myth that tries to take hold of the entire person. Through the myth it creates, propaganda imposes a complete range of intuitive knowledge, susceptible of only one interpretation, unique and one-sided, and precluding any divergence. This myth becomes so powerful that it invades every arena of consciousness, leaving no faculty or motivation intact. It stimulates in the individual a feeling of exclusiveness, and produces a biased attitude.

Propaganda must be total. The propagandist must utilize all of the technical means at his disposal — the press, radio, TV, movies, posters, meetings, door-to-door canvassing. Modern propaganda must utilize all of these media. There is no propaganda as long as one makes use, in sporadic fashion and at random, of a newspaper article here, a poster or a radio program there, organizes a few meetings and lectures, writes a few slogans on walls: that is not propaganda.

The aim of modern propaganda is no longer to modify ideas, but to provoke action.

Propaganda does not aim to elevate man, but to make him serve.

Then again there is a certain kind of postmodern propaganda which is knowing and ironic.

So Propaganda is an encircling totality. It is the place we live where we gather all our information, our entertainment, our education. We must surround ourselves within it. We speak in propaganda as we share our factoids. We cut ourselves off from those who have a different worldview. Or when we do venture into enemy territory, we look at their propaganda, always an exaggeration of beliefs and meanings, something easily mocked and scorned. And that’s another aspect Ellul points out. There must always be an US versus THEM. And they are always wrong, suspect, stupid, dangerous, or evil. The 2016 election cycle in America became a farcical, unreal, and disturbing battle of Propagandas.

And Propaganda must always be unbending and all encompassing. You can’t give ground to those ideas, otherwise you are starting to become them. So it’s not enough to make up your own mind about abortion, gay marriage, gun rights, transphobia, animal cruelty, feminism, global warming, racism, capital punishment, globalism, immigration and the rest. Once your side adopts a posture you must keep in line with the whole program. Heaven forbid a leftish person would opt out of the proper stance on reproductive rights, while holding the rest of checklist in order. Or that a right wing soul would be favor of gun control while holding most of the other appropriate positions. It’s pretty much all or nothing… Or at least that’s how we are made to feel. If you question one tenet you are in danger of questioning it all.

You can see what happens if you look at a subject that is not yet polarized but could conceivably become so one day. Let’s think about pets for a moment. Let’s say you’re talking with someone and they happen to mention that they think that having and feeding pets is a waste of resources and the time and effort would be better put into caring for humans who have so many problems that to distract from that might not be such a good idea. Then that person responds by telling you that you aren’t seeing the whole picture. That dogs and cats, though a cost to raise and a responsibility that perhaps some people don’t have time for, bring much joy into the owners’ lives. And that if you care about human beings then part of the health of being a human in the world is to interact, and closely, with its animal life. Now since that’s just two people discussing a subject that hasn’t yet been given the full propaganda treatment the conversation might go in any number of directions. Although if you listen closely you can already hear subjects creeping into the mix that are from very heavily propagandized terrain.

Now suddenly there is a movement that evolves out of the animal rights and ecological systems that begins to seriously question whether a human, just another species of animal after all, has the right to own another. This isn’t far fetched and is already circling our society as I write waiting to land. And so then what happens is we get two sides. Owning pets would obviously then become an individual rights issue with deep traditional roots. And now you have two sides. But how shall we label them.

‘Anti-pet’ obviously isn’t going very far, though that will be what the opposition calls them. So what about ,’pro=human’ or ‘pro-world’, since this will be considered an ecological issue? And maybe ‘pro-care’ or ‘pets rights’ for the other side. Don’t get too hung up on what to use right now. The new brand names just have to be non-negative. And that’s another serious propaganda point, in this age everything has to cloaked in positive language. Then there will be documentaries made. The pro-human folks will show the enormous waste of food resources, the brutality of certain owners, dog fights, cats in the cemeteries of Paris, old folks living on pet food, etc. The pro-care folks will have to counter that our pets love us, they will show psychological studies showing how pets affect humans for the better (no dog attack or cat parasite news whatsoever), interviews will be made with people who say that their only companion is an unselfish pet. You get the idea. There will be websites dedicated to these positions, TV stations, newspapers will array them along side of other ‘obvious’ issues of the day. And then when our two friends meet again to discuss the subject they won’t be able to believe that anyone could be so cruel, regressive, idiotic or whatnot to believe the lies that they have been spoon-fed by their respective media.

Looking for real discussion at L’Abri in Switzerland.

The difference between a discussion among friends who disagree on some topic and a propagandized discussion perhaps involving the same two people is that in the first there are personal reflections and thoughts. The ideas are unique and quirky. And in the second, the responses completely conditioned by ones of each propaganda web, which will want to keep out anything from another propaganda system. So I can very well imagine two friends discussing the origins of life on earth. One says there must be a creator the other doubts that and they present ideas to each other. What about this? Well what about that? Well you make an interesting point that I’ll have to reconsider. I think I understand why you feel the way you do but I still disagree. Now the same topic among the propagandized. God made the world in seven days and that’s all there is to it. No I’m sorry that’s pure unscientific bullshit. Then how do you explain the fact that there is meaning in the world? There isn’t, everyone just makes their own meaning. And so it goes ad nauseum. They can’t communicate because everything they say provokes a knee-jerk reaction in the other. 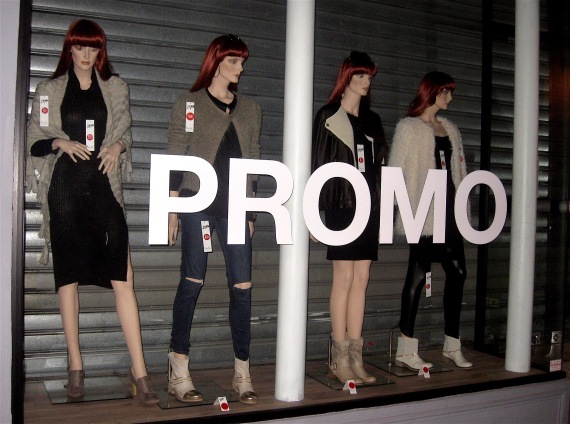 Mannequins in Paris. Propaganda surrounds us at every turn.

Ellul also points out that listening two different propagandas doesn’t help either. For in getting both sides of an issue what you really get is slugged from both sides and feeling woozy and beaten up in the middle.

Now how did this happen? And I have seen this my whole life. People I have known who once had their own opinions come to ape the media they ingest. I’m talking about people who really should know better. How does it happen? What makes us succumb? And I include myself. For I have certainly caught myself in those very situations as I look at my life.

Jacques Ellul points out one key ingredient. We find ourselves alone in the mass. And that is what mass media, mass communication does to us.

But let’s really dissect what happens. Next week!