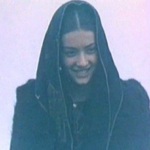 Part One – A Truly Obscure and Blessed Land…

Okay let’s play a game. Quick think of three things you know about Georgia? No, not that Georgia! Not the US state. I mean the country in the Caucasus Mountains: The one that had been swallowed by Russia and the USSR for nearly 200 years and was only recently spit back out into the world.

Now stop reading and think about it for a moment…

Georgia as seen from a satellite.

If you are like many people I’ve spoken to lately you are probably drawing something of a blank. A few people get one point or another. Didn’t they have a war with Russia or something? Or, more ominously, wasn’t Stalin a Georgian? And then I notice a kind of plague of poor information. Isn’t that next to Romania? Isn’t that one of the Stans? Isn’t that a small Muslim country? All completely wrong.

But one thing is for certain, except for people who are Georgians, or who have been lucky enough to run into some aspect of Georgian culture Georgia is currently, and undeservedly, one truly obscure culture. People know more about Myanmar, Nepal, Colombia, Serbia, the Ivory Coast, most of the Middle East than they do about Georgia.

But let’s rectify that now. First of all Georgia is a country about the same size as Austria with mountains higher than the Alps AND they grow oranges there. The oldest evidence of the fermentation and cultivation of wine is to be found in Georgia. They have their own language which is unrelated to anything else outside of the Caucasians. And they have their own alphabet, which looks like a lot of hooks and squiggles. And having said that the name of the country isn’t even Georgia really. They call it Sakartvelo or საქართველო. They are the Kartli. Tbilisi the capital is built on warm springs, which is what the name means. There are about four and a half million people that live there. About 83 percent of them are various types of ethnic Georgians. Then there are Armenians, Turks, Russians, Ajeris, Jews and others.

Okay I could go on but you can look all this up for yourself. I’m not trying to interest you in the country as a tourist destination. 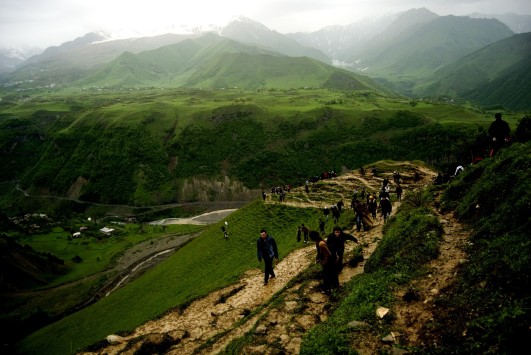 A Georgian Orthodox Procession in the Mountains

I have something else on my mind. As the most observant of you might notice this series of essays is entitled The Anadromous Life. I’m using the word ‘anadromous’ the word to describe certain fish that swim against the stream as the Pacific Salmon do. And by analogy I have pointed out that life today must be lived against the stream, which threatens to take everything downstream with it. I hope that over time I have also made a point that the obvious forms of rebellion are usually exactly the dead things that will just float downstream.

Having said that… finding the truly living things that swim against the current is no easy task. But I think I have something interesting here; a country that often goes against the grain in some of the best ways. And that country is საქართველო.

I have only recently, within the last six months, discovered this country with it’s anadromous culture. Finding Georgia is like discovering a hidden world, a lost civilization, that wasn’t really ever lost. It was just staring at you the whole time, patiently waiting to be noticed. And when you finally look at this culture you find that it is remarkably intact and complete. Yes of course Georgians have been influenced by the modern world. But they stubbornly refuse to give up certain antique traits that set them in a kind of odd stance vis-à-vis the larger world.

First of all to understand this country you have to understand that it goes back perhaps further than any other European land on earth. Some of the oldest post-African fossils were found exactly here. So naturally there was a Georgian or perhaps we should say Caucasian style dating way before written language… anywhere. Then again there was that wine. A sure sign of civilization if there ever was one. Of course there were Gods and Goddesses in a pantheon that was loosely connected to the ancient Greek world. Jason and his Argonauts found the Golden Fleece here. And there was such a thing! And Medea is the first historical woman we know anything about from what was then Colchis now Georgia… but she would not be the last.

Saint Nino, who converted the Georgians in the 4th Century A.D.

Christianity was firmly introduced to Georgia by Saint Nino (წმინდა ნინო) a Christian slave of the royal house who performed several miracles and created the Georgian cross by tying a lock of her own hair around the bent dried wood of a grapevine. Then came Saint Shushanik (შუშანიკისი ) an Armenian woman martyred by her Georgian husband defending the right to believe in Christ. Her story is also the earliest surviving piece of early Georgian writing in the Martyrdom of the Holy Queen Shushanik. And there was also the Georgian golden age under the reign of Tamar (თამარი) the Great in the 12th Century. And it was under her reign that the eerily beautiful book The Knight in the Panther’s Skin (ვეფხისტყაოსანი) was written by Shota Rustaveli .

Now I have emphasized the female aspects of Georgia for a reason. As countries go Sakartvelo is a predominantly masculine mountain culture of warriors that stretches back into the mists of history. Yet interestingly from pagan times and especially since the introduction of Christianity, by a woman, Georgia has had an unusual emphasis upon its women to a degree that many others could stand to learn from. Not that Georgia is in line with contemporary standards of politically correct feminist ideology. Au contraire. Yet it is has long been a country that promotes the development of the creative gifts of its women. And so looking today one finds intelligent artistic women under every mountainous rock.

Nina Ananiashvili is now the artistic director of the State Ballet of Georgia. She claims that the Georgian approach to ballet has some unique features. We will investigate this later. But let’s just say that her own work in ballet is astounding and beyond graceful. 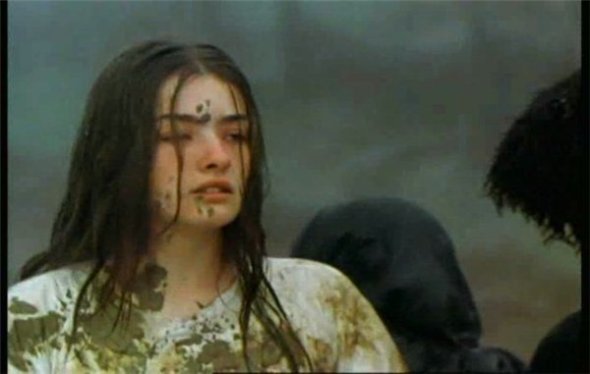 Lika Kavjaradze as Marika, an allegory for the embattled soul of Georgia, in The Wishing Tree 1976

Lika Kavjaradze first made her name in Tengiz Abuladze’s masterwork The Wishing Tree (ნატვრის ხე) from 1976. In that film she portrays a pure village girl, a virgin Mary in transcendence, the embodiment of the philosophical questions related to the existence of beauty in the world and an allegory for the nation of Georgia itself, which is revealed when one man calls her Tamar. And the glory of it is that Lika is actually up to this monumental task with ease, from her first smile to her final mud-soaked procession. 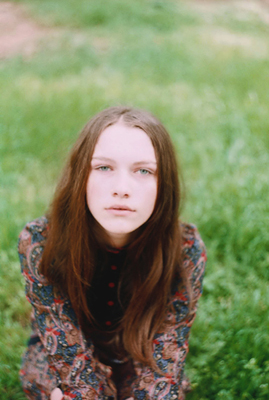 And if you are starting to also get the picture that Georgian women also have a singular essence you need look no farther than the photographs of Mariam Sitchinava to be haunted by the female character in Georgia. She started by photographing what appears to just be friends, friends who later were discovered to become some of the most sublime models ever. Yet only Mariam can actually get to the ethereal heart of her subject.

And then there is music! Where to even begin…

Even totally amateurish videos of teenagers singing together give you goosebumps. And it isn’t being done in a self-conscious postmodern look-at-me-I-want-to-be-a-star kind of thing. In Georgia people still sing together unselfconsciously. And what a miraculous thing it is too. 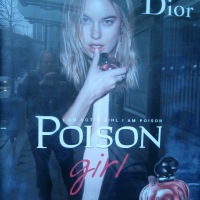