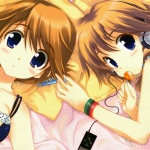 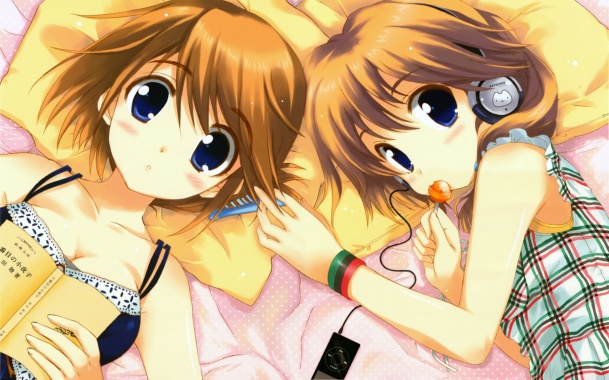 A couple of Anime best friends… or is it the destiny of 21st Century humanity.

Oh Cute! I’ve been meaning to get back to this, where did it come from? Why is it here? How did it creep up on us unawares? How did it come to be so unassailable as cultural values go? How did it come to infect children and old ladies, Christians and atheists, straights and gays, Europeans and Asians, and ultimately the world. Obviously in an essay like this, even in a series, there isn’t time or space to go into the whole process. But maybe we can suggest a bare outline. I won’t retread what I’ve already said, but maybe we can define our terms a bit, or rather the term… Cute.

This is Japan. America and Europe also have cute statues. It takes a lot of work to make a statue. Why are Cute images so important that someone would commemorate them in such a permanent way?

Cute, as with all words, once upon a time did not exist. In fact as words go it is relatively recent. Cute, the word, derives from acute in its meaning of sharp. Eventually it became simply cute when describing, say, a couple of bright young girls. And somehow it leapt from there to the babies. How exactly? Someone needs to do more research in this area.

Words are one thing and reality is another, for we not only now have a word to denote big-eyed cuddly baby-like imaginary creatures, we now have those images surrounding us in flat and three dimensional plastic form: We have plush dolls and anime movies, posters and puppets, emblazoned sweaters and YouTube videos. And so that leads to the question of where these objects came from.

Go back a few hundred years and you will be very hard pressed to find any representations remotely resembling these treacly figments. Artists did not portray these sticky sweet characters. There were no cartoons as we know them now. Dolls had much more gravitas about them. Puppets could be downright baleful.

Perhaps our problem begins with Peter Paul Rubens in the 17th Century. This is supposedly a painting of Jesus and John the Baptist as infants.

Then German and English Romanticism, where Nature and the Soul was deified, began to trickle down from being an artistic and poetic philosophy to a more mundane species of everyday life. Emotion reigned over the intellect for the bourgeoisie, sensitivity and discretion in matters of everyday life. Women were placed on a shelf, where today’s sexual liberations and gender philosophies are still trying to rescue them; especially from late-Victorian/1950s influenced Christians, who unfortunately are the last one’s holding the Romantic bag. And children, following Rousseau’s idealizations, eventually became the focus of sentiment, another new category. (Although sentiment at this stage was a fuller idea allied with the other new concept of sensibility.) One feels this new approach towards children in the many wonderful children’s books that began to appear in the late 19th Century and early 20th, many of which became treasured classics down to this day. Consider Waterbabies, At the Back of the North Wind, Wind in the Willows, Peter Pan and, supremely, Alice in Wonderland, among many others. And yet it is not these books that open the door to the Cute virus. 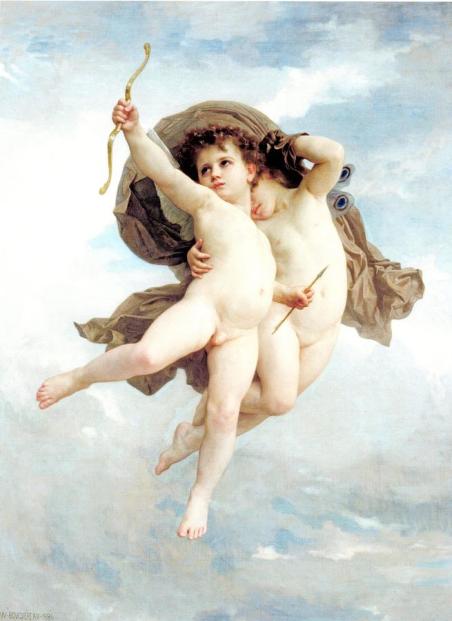 With Bouguereau the worm is evidently in the apple. Maybe I was wrong about the Western exclusion of sex from cuteness.

A visual root also hearkens back to the Victorian Era. There is perhaps a bit of a prehistory in say the little cherub motifs in European art, Rubens made the first break with his miniature Herculean cherubs. Overly fleshy, angelic baby things, inaugurating a trend towards the sentimentalization of pink tiny angels taken to extremes by a late Romantic artist like William Adolphe Bouguereau. But the decisive artistic break comes from an offshoot, a commercial offshoot of the Pre-Raphaelite movement in England in the mid-19th Century. John Everett Millais one of the original Pre-Raphaelite Brotherhood, later in his career painted portraits of the kinds of upper class families that certainly did dote upon their children. In a couple of images, particularly The Tea Party and Bubbles, he created a template for Cuteness that almost immediately was adopted by the nascent commercial industry for soap. And this alliance between Cute and business has remained in force ever since. Cuteness is a species of sentimentality in its more modern sense, which can now be seen as the use of emotion inappropriate towards the object of that emotion. And that emotional falsity can now be used as a tool for manipulation by marketers and propagandists alike. 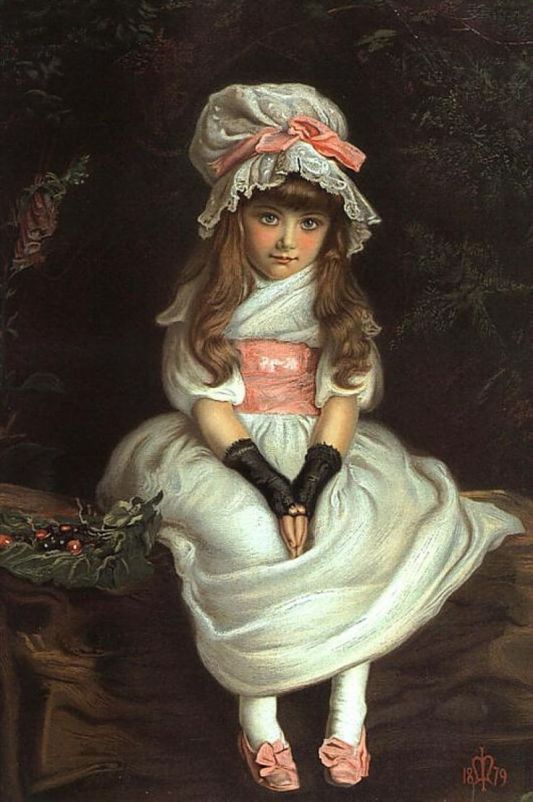 This might indeed be a portrait of an upper crust English child done by John Everett Millais. But those eyes are not human.

Late Victorian children’s culture is awash in cutesy images and concepts. Children’s books themselves became an entire industry. But the big eyed round headed creature has not made his arrival yet.

It takes Walt Disney to do that, along with his German graphic designer Ub Iwerks. With work on Oswald the Rabbit in the mid-20s and then in 1928 the debut of Mickey Mouse in Steamboat Willie a decisive moment had come. Though a dam of common sense is still holding back the tide of insufferable baby-likeness. The early Mickey had the big eyes, but the head shape was still a bit too rodentine. But by the end of the 30s Mickey Mouse would evolve into the prototype of all things cute. By Fantasia, which has truly fearful devils, influenced by the creepier puppet films of Ladislas Starewich, we find the round headed Mickey Mouse recognizable today, as well as far too many cute fairies in Beethoven’s Pastorale. 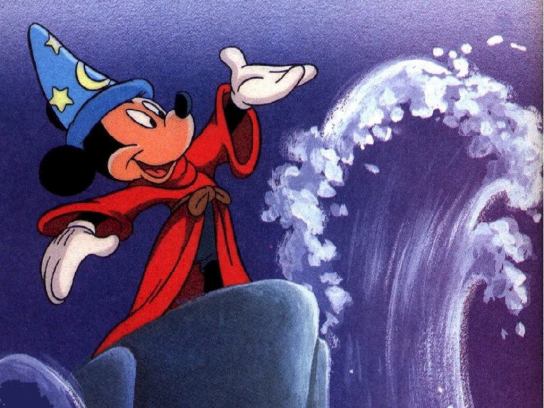 Mickey Mouse from Fantasia. This was supposed to be Disney’s bid to be respected artistically.

But through Disney the new conception of Cute became the province of anyone wishing to communicate with children, which eventually television, needing simplified imagery to avoid video feedback, would latch onto with a vengeance. Puppetry, cartoons, graphics were all made into rounded cuddly shapes. 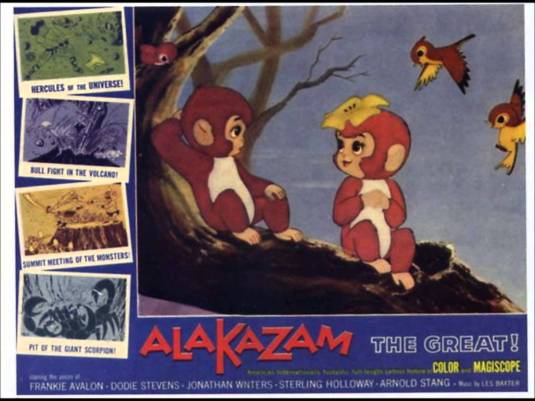 Alakazam the Great : Very early Anime where the links between the Japanese style and Disney are much clearer.

A major addition to the canon of cuteness came from postwar Japan in the forms of manga and anime. A very early anime cartoon from 1960, known in the west as Alakazam the Great (Saiyûki), shows how much the Japanese cartoon industry was influenced by Disney and then really enlarged the eyes. And yet the truly distinctive feature of anime is that the Japanese idea of cute – kawaii – allows for sexuality and violence in ways unimaginable in western cartooning for years. There were exceptions to the cute/child paradigm in western culture before anime, Bill Baird’s stripper puppet comes to mind, but generally they were kept separate, with sexual images following the European patterns of bandes dessinées until the 90s when the West began to follow suit.

But it didn’t matter by then. Cute had become an unquestionable reality for the many artists of the late 20th, early 21st Century. Churches could feature cute art. Horror films could give birth to cute parodies.South Park could feature a rather cute ‘Christmas Turd’. (???) You might even be wonder why I’m even bothering to question cuteness. What kind of archaic monster would do such an evil thing! But it is precisely the assumed and unquestioned that needs questioning the most. 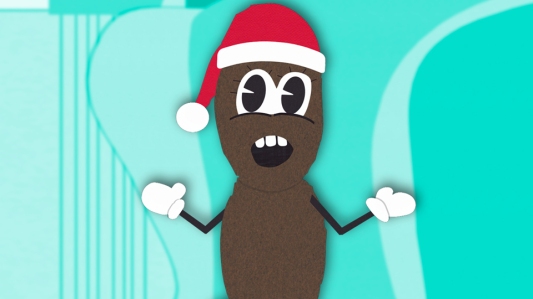 (Alas I apologize for having taken so long to get back to this series. A prolonged death in the family intervened. Also there was my work on Gravity From Above. And I kept getting distracted by the fact that I left this series unfinished. I had plenty of other subjects to mull over. And even now I’m going to have to put off the third aspect of the Sacred Cows of this contemporary world, Positive Thinking, for a while. (But I positively will finish up this series when I can!) Meanwhile I am getting closer to the country of Georgia and I wanted to report my musical findings to anyone still following this site. But for now we shall let the Sacred Cows rest.)